Sun Premier Village The Eden Bay is located at a unique location at the end of Mui Ong Doi - a rare two-sided strip of land in the world. The project includes 51 VIP villas, with 3 types: rocky rapids near Sea Touch, Mystic Hill hillside villa, Grace Wood forest villa. Each villa has a rare, elaborate and mysterious element, built wonderfully on top-level terrain, offering a 135-degree view of the sea and directing to the Hon Thom cable car. Sun Premier Village The Eden Bay is like a "garden of Eden", separated from the outside by the Wonder Gate gate to maximize privacy.

"Heaven in the world" - It is not exaggerating to compare like that, right ?, Sun Premier Village The Eden Bay Resort Phu Quoc seems to have gone beyond the thought of a place that can exist on earth. this. Sun Premier Village Phu Quoc phase 1 is a masterpiece with extremely classy 2-sided villas, this phase 2 Sun Group launches 50 super VIP villas with standard utility services. 6 stars. To once again affirm that Mui Ong Doi is the paradise of Vietnam's resort, each villa The Eden Bay Resort is a work of combining nature with talented hands of famous architects. world.

To become one of the fifty-fifty owners of The Eden Bay Phu Quoc, you must be a player from heaven, coming here because of love, passion for beauty and an extremely quick investor to grasp. that is a good change. Is the 40-hectare area at the end of Mui Ong Doi for 50 villas of Sun Premier Village The Eden Bay Resort is a great scale? Is there any answer that satisfies the closeness of nature, or rather Villas and nature are already one and it seems that when enjoying vacation at the villas The Eden Resort Mui Ong Doi will find themselves lost in the woods and in front of the vast sea. One glance can also see the sea, a breath can also smell the sea, Phu Quoc is very blue, Phu Quoc sand is very white and the feeling you will get while here! Heaven where the pearl island! 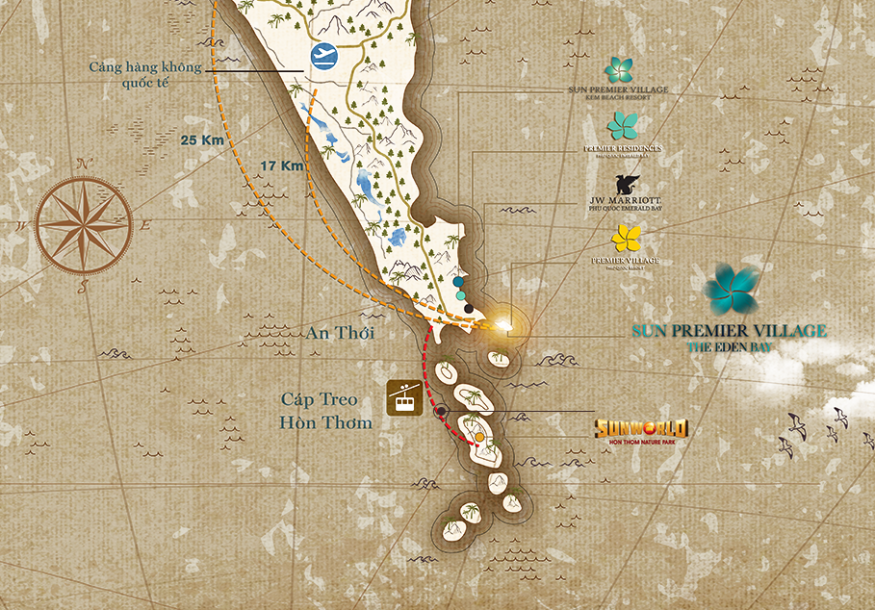 Arriving in South Phu Quoc, the blue sea, white sand, golden sunshine and even beautiful pristine islands, then the long stretch of land at the end of An Thoi always captivates all visitors if having the opportunity to arrive this. Especially is Mui Ong Doi, a land on both sides of the sea where you can watch the sunrise and admire the majestic sunset on the vast sea.

Premier Village Phu Quoc Resort with a prime location at Mui Ong Doi was just put into operation in early April - this rare double-sided resort in the world has captivated visitors by its romantic and trendy beauty. . The two sides are pure white sandy beach, clear blue water at the bottom; Also alternating between the cool green colors of trees are white villas with different heights, leaning against the old forest. 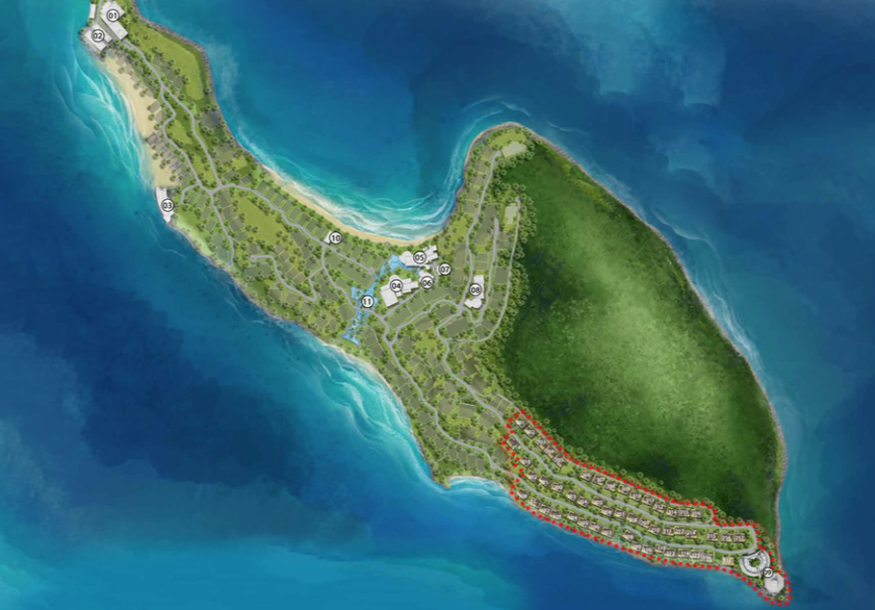 The Eden Bay - Garden of Eden in South Phu Quoc

The resort came to Premier Village Phu Quoc Resort, and they were curious about the area at the end of Mui Ong Doi. The land is covered with green forests all year round, surrounded by waves of ocean waves. The sound of birds singing, the whispering waves, the sound of peace and unspoiled nature ... could this place be the "garden of Eden" that people often dream about? A place where people are willing to "spend money" just in exchange for private relaxation moments.

South Phu Quoc will be the second landmark of "the prince of the most glamorous resorts in the world" - right at the very end of Mui Ong Doi.

Because, with the masterpieces designed by Bill Bensley's architecture such as Sheraton Grande, Four Seassons chain, Marriott in Thailand, Grand Hyatt in Indonesia or 2 luxury resorts in Vietnam, with a professional eye and love With natural availability, Bill Bensley will surely find it difficult to ignore a natural masterpiece like Mui Ong Doi.

Each villa is equipped with individually designed imported furniture, which are both modern and close to nature. Minimalistic and detailed design style so everything blends with nature. Customers will feel the true meaning of the resort with accompanying services such as forest spa, overflowing swimming pool, luxury restaurant with thousands of Asian and Asian dishes.

In particular, the main impression is the infinity pool simulating the terraces of the Northwestern mountains, designed overflowing at many heights connecting from the East to the West Coast, as one with the vast ocean. .

The 5 ++ star utility system is ready for the perfect relaxation & enjoyment experience!

Designed on a unique drop-off terrain on the hillside, the villas here offer a completely new "privacy in an open space" architectural concept using the overflowing glass panels. in all rooms, like bringing nature into the living space. 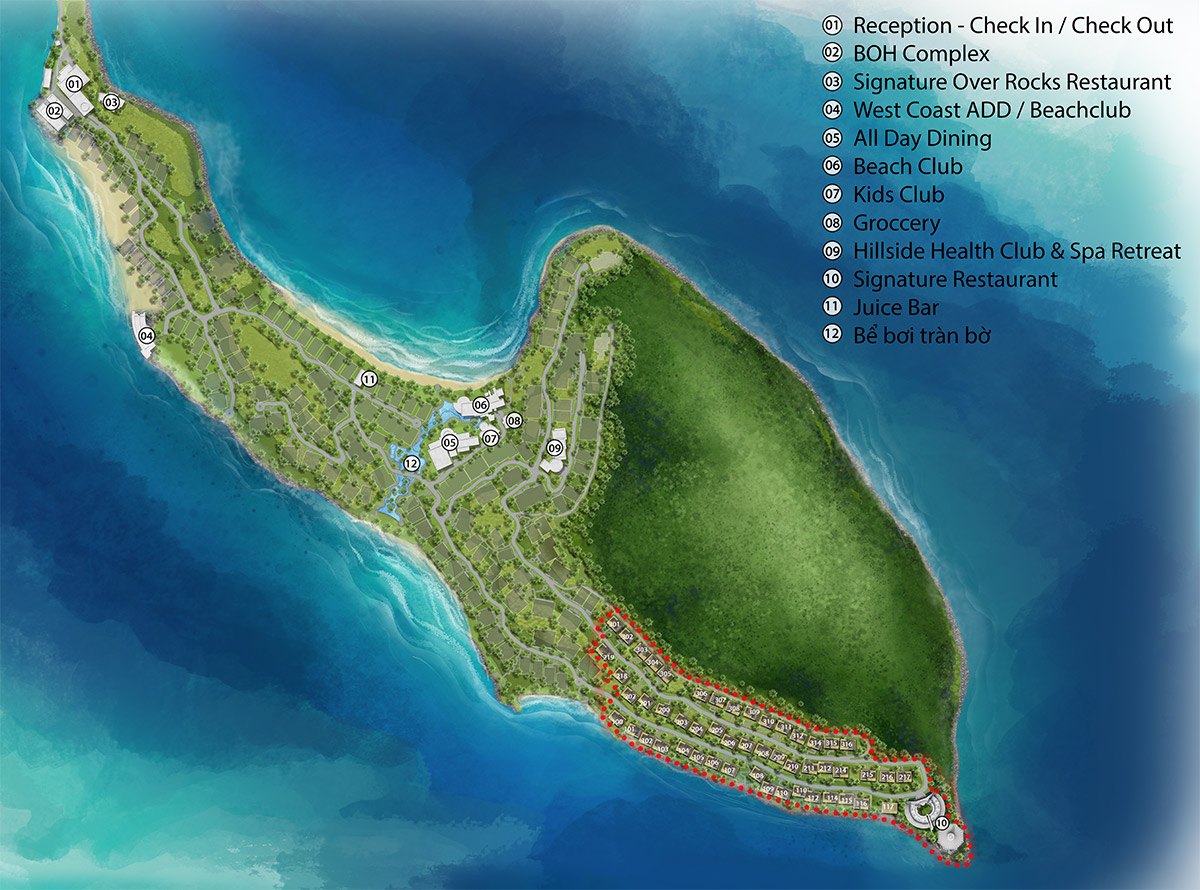 Each villa in the project aims to bring the true enjoyment to the owner, so that they are fully immersed in nature in this place.

The houses head to the mountain, overlooking the blue sea, keep the privacy for visitors and bring interesting experiences. When the dawn comes, the villa will receive the early rays of sunlight in the morning through the spacious windows.

On windy afternoons, the balcony is a place for owners to sip a cup of coffee, read a book and inhale the scent of the salty sea breeze. When the silver moonlight shines on Pearl Island, the owner can walk along the hillside to watch the bright moon or enjoy the peaceful night.

Located at the end of Pearl Island - Mui Ong Doi, 10 Grace Wood villas are compared to rare gems, hidden amidst wild but magnificent nature. Here, the boundary between heaven and the earth seems blurred, setting a new peak in enjoyment.

A new masterpiece named Grace Wood becomes the perfect piece to bring this place to a new height in the island tourism industry around the world, shoulder to shoulder with many large and small islands and archipelagos ...

Grace Wood is known as the only forest villa series belonging to the Sun Premier Village The Eden Bay project, with 10 units located at the highest position in the project, leaning on the gentle slopes of the mountainside, secluded, privacy lies at the end of Mui Ong Doi.

The company has not IPO

Sun Group Full name is Sun Group Joint Stock Company which was established in 2007 by Mr. Le Viet Nam. After more than 10 years of establishment, Sun Group has become one of the largest and leading private economic groups in Vietnam with world-class projects.

Speaking of Sun Group, it is impossible not to mention the group's chairman Mr. Le Viet Lam - The soul of Sun Group. The most private billionaire in Vietnam.

Mr. Le Viet Lam was born in 1969, is from Thanh Hoa. In 1987, he went to Russia to study for his master's degree. By 1993, he was with Mr. Pham Nhat Vuong - Vingroup's chairman, Ms. Pham Thuy Hang and Ms. Pham Thu Huong - the current Vice President of Vingroup. And some of my friends founded Technocom, a packaged food business in Ukraine.

He is also the president of the Vietnam Businessmen Association in Ukraine. And leader of Future Generation - one of the largest groups of Vietnamese in foreign countries.

In 2008, the group continued to expand its investment through resort real estate and had great success. InterContinental Danang Sun Peninsula Resort project has a global name with 200 units Danang beach villas Sea view, the resting place of politicians, world corporations when coming to Da Nang.

Now, Sun Group has 51 members with 113 large and small investment projects. Taking entertainment, tourism and relaxation, real estate investment and infrastructure construction are the strategic development areas of the corporation.